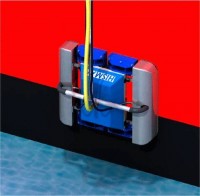 The self-navigating robot cleaner makes it possible to improve maritime fuel consumption, while also reducing the environmental impact of previous cleaning approaches. It is a result of the HISMAR project, funded under the EU Sixth Framework Programme (FP6), which set out to develop a multi-purpose inspection and maintenance platform for ships’ hulls with an advanced navigation system.

The innovative system first maps the hull of a ship automatically, recording the locations of every weld, rivet and indent, as well as areas of differing thickness. Once attached magnetically to the hull, it can then use this collected data to plan a route across the surface, cleaning as it travels.

Cleaning is carried out using adjustable jets of sea water. By blasting sea water against the hull, various particles of marine growth are removed efficiently. Once the particles have been separated from the hull they are sucked inside the robotic unit, and processed inside its main chamber. In total the unit processes 150 litres of water a minute, filtering the marine growth particles to remove bio-fouling elements. In doing so, particles that may have previously impacted on the local marine environment are rendered harmless.

Once in use, the robot can continuously patrol the hull, preventing marine growth or slime from ever building up. The robot is intended for use in port and is relaunched at each stop. This regular cleaning enables ships to travel more efficiently through the water, dramatically reducing drag and lessening the amount of fuel consumed.

In addition, the robotic system also offers a far more environmentally friendly cleaning method. Until recently, ships were regularly treated with anti-fouling paints that contained tributyltin (TBT) as an added biocide to prevent marine growth from forming. This substance has now been banned worldwide as it contaminates water surrounding the vessel. This robotic system offers a green alternative as it does not have the same detrimental impact on marine life and the environment.

Minewater set out to develop a geothermal power station exploiting water in abandoned mines in the town of Heerlen – at the heart of a Dutch coal-mining area that closed its last mine in the 1970s. The objective was to show that such mines offer the potential to supply ‘green’ energy for municipal heating and cooling applications. In addition, it was hoped that this initiative would highlight the associated environmental and employment benefits.

Set up in 2005, the project involves seven European partners including municipalities, building research institutes and housing associations, and has received strong financial support from the EU. The concept was developed by local government energy management coordinator Elianne Demollin-Schneiders, who recognised the geothermal energy potential of the city’s mine water. She received the support of the mayor’s office in the municipality of Heerlen to implement the pilot project.

Organisations from France, Germany and the UK backed the innovative concept and supported Heerlen as the lead city. Additional assistance came in the form of funding from the EU with 48% of the €20 million costs coming from the Interreg IIIB NWE programme, part of the EU Cohesion Policy that channels investment from the European Regional Development Fund (ERDF) into the economic, environmental, social and territorial future of North West Europe.

The power station consists of two sites in the centre and north of Heerlen. Work began in March 2005 when two 825-m wells were drilled at Heerlerheide to access trapped mine water at a temperature of 35°C. Three wells were then drilled at Stadpark Oranje Nassau, ranging from 250- to 500-m deep. These shallower wells receive the Heelerheide water after it has been used for heating. This water will then be stored until needed for cooling.

Project partner Weller housing association constructed 200 houses, shops, offices, a library and a supermarket in the area between the two mine sites. All the buildings contain heating and cooling systems designed to run on energy from the mine water. Calculations estimate that the concept offers a 55% CO2 reduction. “We believe the mine-water power station will provide the proof that the concept works,” says local alderman Riet de Wit.